Erkhureleni EMS Workers told : If you don’t want to work without a mask or gloves, go home………………

It has come to the attention of the Democratic Municipal and Allied Workers Union of South Africa (DEMAWUSA) that an appalling state of affairs is unfolding in the emergency services in Erkhureleni.

Over the last 24 hours, our representatives and members located in the EMS Services and in other departments are despairing at the cold hearted and irresponsible response of the Erkhureleni authorities. When they have been repeatedly asked by key workers to provide even basic personal protective equipment (PPE), and other equipment to be able to protect their own health and that of the communities they serve in these critical times, they have been told to go home, or take the risks.

Even the most basic of equipment, including gloves, masks and thermometers are either not available, or are in very short supply to ambulance crews and others, who are attending to countless calls from the community.

The union has written evidence and recorded conversations with the Municipal authorities, and statements from front line responders, clearly indicating that workers who questioned the absence of essential equipment were told to go home if they were not prepared to work without adequate safety equipment, and no, this would not be put in writing!

Our comrades, like so many others in municipal and state services, are dedicated professionals. They have told their managers that they simply MUST work, to help protect the communities that many of them live in. They must be given the vital equipment to protect themselves and those they are committed to servicing. And yet nothing has been done. Sadly workers in Primary Healthcare and in other departments are facing similar challenges, risking their lives and those of others.

The lack of action and care for the community and the workers of Erkhureleni flies in the face of both the Governments stated policies on containing the virus, and is in direct contradiction to labour laws that protect the health and safety of workers. Victimising Unionists who raise these important questions is also completely unacceptable, and we will fight tooth and nail against it.

As the unfolding crisis elsewhere has repeatedly shown, if you do not look after the health and safety needs of that crucial and invaluable layer of professional health workers on the front line resulting in them being struck down with the virus, you are leaving the entire population at risk.

It is now the golden rule almost everywhere else in the world, health workers must be protected. That there is a critical need to ensure first responders like ambulance crews and primary health workers are able to do the work that they have been trained to do, and that this is of paramount importance when attempting to beat the virus at its most potent.

In Erkurheleni ambulance crews are being issued with five masks per shift. Two for the crew, one for the first patient and two remaining for a list of patients that is ever growing. Some ambulance crews have given their own masks to elderly patients rather than take them for themselves. As one of our shop stewards noted “They are turning our ambulances into taxis and virus incubators, and we are not able to do the vital checks that can save lives”

Imagine the shocking predicament of being a health worker who is unable to wear or provide a mask for a patient showing symptoms of the virus, and who cannot even take their temperature? This is a national scandal, and the authorities in Erkureleni must be brought into line without delay.

To make matters worse, ambulance crews are going into service without blood pressure or glucose checking equipment, or pulse oximeters. All of this equipment is especially needed in poor communities where the ailments that this equipment monitors are reaching epidemic proportions and will eventually militate against recovery from the virus. To make matters even worse, ambulances are not being decontaminated after carrying those infected with the virus, or are procedures clear for disposing of what little PPE is being supplied. This is nothing less than a reckless abandon of the needs of poor communities. It is shameful, and completely avoidable.

This Union applauds our comrades in NEHAWU, who in the face of a negative media, and a procrastinating government, have held firm in their quest for PPE for all health workers in pursuing the matter through the courts. Our Unions and Federations may have different approaches on many questions, but on defending the interests of the working class and our communities in the current crisis we are as one. Victory to NEHAWU! Health Workers Unite and Fight! Defend working class communities!

The authorities in Erkhureleni must get their heads out of the sand, and wake up to the crisis that is unfolding around them. This is not the time for empty justifications or promises, or threats, or ego-centred reactions. For all of our sakes, they must immediately take steps to protect their most valuable asset, the workers attempting to deliver services to our communities. Failure to do so will not be forgotten as preventable infections and loss of life escalate. Act now to save lives!

In the meantime, the Union is consulting its lawyers, and with its Federation SAFTU and friends in the C19 Peoples Coalition is planning other measures to shake the Municipality out of its denialist mentality.

Issued by the President of Demawusa 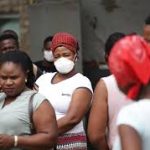