Civil Society demands that the government provide support to the most vulnerable in this moment of crisis: Extend and increase both the R350 Covid-19 Social Relief of Distress (SRD) grant and the Caregivers grant to R585 per month until we have a comprehensive plan for guaranteed basic incomes.

South Africa has an estimated population of 15 million people with no or little income. The SRD and the Caregivers grants, along with top ups to other grants, were rolled out to address immediate hunger and poverty, exacerbated by the pandemic. For the combined 12.7 million people receiving the SRD and Caregiver grants, it has been a lifeline; the NIDS CRAM data has shown that receipt of the grant has been pro-poor, and has helped stave off hunger while the Caregiver grant has been especially important for supporting women-headed households. Despite these benefits, millions of people have been unjustly excluded from receiving the SRD grant due to the conditionalities attached to it. The SRD grant remains insufficient to cover basic food costs and is even less when shared amongst household members. There have also been administrative failures from SASSA and the Department of Social Development. We witnessed people sleeping in lines overnight in the cold outside SAPO and SASSA offices, only to be turned away the next morning. The gross exclusions can be attributed to challenges with the online and administrative processes such as applications being verified on a monthly basis against outdated databases, delays and glitches with payments and corruption within government departments. Furthermore, applicants received unclear or no communication from SASSA and the appeal process is fraught with problems. The most urgent priority for the government is to continue and improve these emergency measures.

Now is not the time to cut back

Currently, approximately 70% of adults live below the Upper Bound Poverty Line (UBPL) of R1268 per person per month. In June 2020, 37% of people ran out of money for food. This widespread poverty experienced by so many has played a significant role in how the mental health crisis has been exacerbated by the pandemic, with symptoms of depression ravaging the country. The pandemic is far from over and we could be entering a second wave of infections. Even before the devastation of Covid-19, South Africa was the most unequal country in the world and this pandemic has only made things worse: we are in the midst of an economic, health, and inequality crisis and the prospect of finding jobs is near impossible. We are likely facing our worst unemployment disaster in the history of our democracy, as people lose even the most meagre incomes. The SRD grant has brought millions of previously excluded people into the social security system. It has provided crucial support for millions directly, and has indirectly benefited many more. Job losses have affected underpaid workers, women, informal workers, and those in rural areas the most and the primary claimants of the Caregivers grant have been women. We have seen the gender wage gap double for poorer workers over the Covid period, which is why the #October7Shutdown protests centred the demand for gender equality. We believe that the extension of the Caregivers grant will help cushion the worst backlash of the pandemic against women specifically.

Without immediate intervention, these benefits will be terminated at the end of October, causing a humanitarian crisis with approximately 6.8 million people plunged below the food poverty line. Thus, both these grants must be extended as a matter of urgency.

Based on available estimates and assumptions of 5.6  million and 7.1 million respectively (at current levels of access), the extension of the SRD grant and Caregiver grant at R585 per month will cost a combined R37 billion. At a fraction of spending proposals under consideration, this is a clear test of whether the government puts the interests of capital before people!

All available information clearly suggests that the government has decided not to extend the grants at the end of October. Government’s decision to terminate the relief measures is irresponsible and reprehensible given the socio-economic realities of our country. This decision must be reversed.

We urge government to fulfil its constitutional obligation to provide relief to the poor.

We call on government to:

Social welfare measures must be put in place for those who have borne the worst brunt of this pandemic.

The fact that the Supplementary Budget in June has not mandated the extension of the SRD grant and the Caregivers grant indicates that the forthcoming Adjustment Budget in October will likely not provide for this. National Treasury has stated in different fora, including Nedlac, that it is not considering this option. This reflects the South African government’s total disconnect from its people’s struggles. This failure to meet the above demands would deepen the crisis. There can be no recovery for the country’s people, or its economy, without protecting the most vulnerable members of our society. The extension of these grants are critical until we have a comprehensive plan for guaranteed basic incomes.

To include your organisation as an endorser of this statement, follow this link. 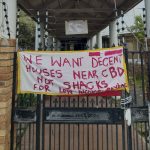