Press statement: Letter to the Presidency about increasing instances of evictions and State violence

Press statement: Letter to the Presidency about increasing instances of evictions and State violence

The Anti-Repression Working Group of the C19 People’s Coalition has written to President Cyril Ramaphosa and the National Command Council about alarming incidences of State violence and unlawful mass evictions of vulnerable people in South Africa.

The President has called for all organs of State and all people within South Africa to “at all times”, “observe the human rights of all people”. The Declaration of a State of Disaster, and all the Regulations that followed have been implemented in the name of combating the spread of COVID-19 and saving lives. It does not give municipalities and security forces licence to use this disaster as an opportunity to exert power over the powerless.

Our letter to the Presidency, which can be read in full here, addresses four main trends that have emerged since the Declaration of a State of Disaster:

These trends are all interlinked, demonstrating, at best, a misconception by municipalities and by Minister of Police Bheki Cele of their role and duty in the prevention of COVID-19.

We, as a civil society, consequently demand that the Presidency take action immediately to stop these human rights violations, by: 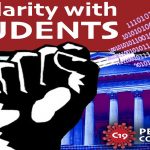 Call for solidarity with studentsC19PC Statements 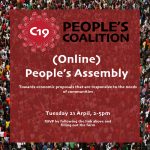