Progress has been made, but government must urgently clarify the Child Support Grant top-up

C19 People’s Coalition press statement: Progress has been made, but government must urgently clarify the Child Support Grant top-up

Government has finally responded to the needs of millions of the most vulnerable South Africans, who have been forced to live without income and with extreme hunger, for a month. While we welcome the R500 billion relief package, including R50 billion allocated to social grants, it has taken a great deal of avoidable suffering and enormous public pressure.

There will be a R300 increase in May for each Child Support Grant, followed by an increase of R500 per caregiver (not per child) for the five months thereafter. All other social grants will increase by R250 for the six months. There will also be a special COVID-19 grant of R350 per month for six months for all who do not currently receive any other grants and are not eligible for Unemployment Insurance Fund (UIF) payouts. We welcome this recognition that everyone who is without an income – including those aged between 18 and 59 – must get social grants. This is a principle we are fighting for, and will continue to push for, as we advocate for a Basic Income Grant!

The government announced an increase of R500 to the child support grant for June to October, but it appears that they plan to give only R500 per caregiver. This means if you are a caregiver for two children you will not receive an additional R1000 (two X R500) but only an additional R500. On average, half as much cash will be transferred to households. This was not clear from the President Cyril Ramaphosa’s  speech, but was clarified by SASSA. It is outrageous to have misled the eight million people who depend on this grant,. We demand that President Ramaphosa ensure that what he said is implemented: that the grant top-up should be for each grantee, for each child, and not only each caregiver. We want the President to address this specifically, and to confirm the R50 billion for social grants.

The child support grant  in South Africa applies a ‘follow-the-child’ method: it is paid to the child’s primary caregiver. To no longer ‘follow-the-child’ – the grantee – is to divert from this important understanding that caregivers are often grandmothers or women family members (not only biological parents). It would also provide much less relief to the burden those caregivers – predominantly women – are being forced to endure during this pandemic.

The government must do more!

These gains are important, but they are not remotely enough. The special COVID-19 grant of R350 per month is far too little. It is less than a third of the R1227 that government itself says a person needs to have to be out of poverty.

Details on how the relief package will be financed remain unclear. We oppose the imposition of any form of conditionality in the event that government insists on taking loans from the World Bank, International Monetary Fund, BRICS New Development Bank or the African Development Bank.

We also oppose any moves by government to use the COVID-19 crisis to force through a programme of self-imposed structural adjustment.We will resist any proposed cuts in public spending on the social assistance, services and infrastructure that our people and economy rely on. The crisis demands solidarity, not anti-poor and economically costly austerity measures.

Taxes should be increased on those who may benefit from the crisis! The richest 3 500 South African individuals hold a combined wealth of over triple the full R500 billion allocated to COVID-19 relief. Many people in  high-income groups are able to work from home and have not experienced pay-cuts. Major retailers and food corporations are profiting off this lockdown period, as the informal sector is locked down or cannot operate normally.

First, the relief promised depends on the capacity of the Department of Social Development to timeously roll out the new grants to those who need it, and on the capacity of the UIF  to efficiently and swiftly deal with claims. The UIF has failed to meet the increased volume of new claims. While formal workers are meant to be covered, businesses have often not applied for them. Workers have simply been laid off, had their hours reduced, been compelled to take paid or unpaid leave, or forced to continue working in unsafe conditions. Continued State support of business should be made conditional on a legal commitment to comply with workers’ rights and protecting jobs. Critically, sectors that employ people who are not registered with the required bodies need to be taken into consideration. For example, most of the Early Childhood Development (ECD) workforce, a critical workforce for childrens’ well-being and education, are not registered with the UIF or the SA Revenue Service.

Second, there is no clarity on how the R20 billion allocated to the Department of Health will be spent. Further, this amount is less than 10% of the health budget, and we are entering the COVID-19 pandemic already in a healthcare crisis. Frontline healthcare workers continue to go to work without adequate personal protective gear. 60 000 community healthcare workers (CHW) are set to play a crucial role in South Africa’s response to COVID-19, but they remain informally employed, on meagre stipends, without the training and protection they need to perform their work safely and effectively. Only through a community-centred public education approach, driven by CHWs, can we transform high-level national policy into successful implementation of physical distancing, hand washing and mask wearing. These are actions upon which our success or failure will rest, and government must commit to adequately supporting healthcare workers!

Third, government’s food relief programme is mired in SASSA incapacity, local corruption and patronage politics. Social grants only include South African citizens, while there is xenophobia in the distribution of food packages and other vital humanitarian assistance. This country was built with the blood and sweat of people from across the continent, and its continued viability remains intertwined with that of our regional neighbours.

To defend against abuses, the Coalition calls for maximum transparency in government operations and for it to work with civil society monitors of high-risk processes, particularly around the R20 billion allocated to municipalities. We are willing to mobilise community activists to play this role.

The top up to the child support grant addresses, to an extent, the dependence of approximately nine million children on school feeding schemes, but as universities and schools reopen there is an asymmetry of access exacerbated by the digital costs of remote learning which we have to address to avoid further stratification of an unequal education system.

We reject the militarisation of a humanitarian crisis

Government’s task is to meet our people’s needs, not oppress them. It should focus its energies on addressing chaos in the administration of healthcare and relief. In light of these urgent needs, it is even more alarming that the government has decided to spend nearly R5 billion on the deployment of more than 73 000 additional SA National Defence Force (SANDF) personnel. This cannot be justified unless they are to play the humanitarian role they have thus far failed at. Since the lockdown started, there have been incidents of police and army violence against community members. People have been beaten, humiliated and killed. Small-scale producers and informal sector workers continue to be harassed by security services. Women, children, sex workers, LGBTQIA+ people, migrants and black people are especially vulnerable.

To prevent further incidents of violence, government must renounce a militarised approach to COVID-19 and ensure constitutional discipline in the police and army.

Crucially, the violence at the doorstep mirrors the violence within the household. South Africa has amongst the world’s highest femicide rates. Domestic violence has risen since the lockdown, with almost 13 000 calls to the gender-based violence (GBV) Command Centre between 27 March and 17 April according to the Department of Social Development. We know from our movements that this represents only a tiny fraction of the violence women are experiencing. In spite of President Ramaphosa’s  commitments to tackle gender-based violence, we are concerned that there wasn’t any mention of additional resources to tackle GBV. We call on government to direct additional human and financial resources to tackle the surge of GBV during the lockdown.Special courts must be put in place during the lockdown dedicated to taking GBV cases.

No return to business as usual

This pandemic exposes even more brutally that our economic system cannot work. It fails the majority of our population, in normal times, and even more so now. This crisis will not end with the easing or end of lockdown provisions. Structural changes are needed.

Around the world, people are resoundingly rejecting the neoliberal economic model of the last forty years. It has enriched the few and impoverished the many. It has dragged us unprepared into this global pandemic and toward broader climate change catastrophe. Our government, which has already moved far too slowly on measures to support the most vulnerable, needs to rise to the occasion in the most unequal country in the world.

The new COVID-19 grant is an important step towards including groups previously left out from cash transfers, including the unemployed. The redistribution of income and wealth could sustain a basic income grant aimed at ensuring immediate and effective relief in the crisis and beyond.

We above all reject an approach by government that aims to simply return us to business as usual – a crisis of unemployment, poverty and inequality – and continue to build momentum for a truly radical reimagining of South Africa beyond the current crisis. 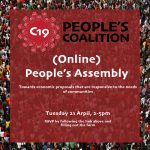 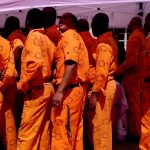