The past 25 years of both inadequate levels of public expenditure (some as a result of waste, incompetence or corruption) and unimaginative policymaking have resulted in untenable levels of unemployment, inequality, and precarity for the majority of South Africans.

Essential services like healthcare and basic infrastructure, including sanitation, have seen a consistent decline in the quality and degree of provision. Government admits that only 44% of South Africans have a water tap in their houses.  All of this leaves South Africa with no cushion against the Coronavirus outbreak and South Africa is in fact particularly vulnerable to this pandemic – socially and economically.

Under the leadership of Finance Minister Tito Mboweni, the Treasury is now preparing the public for an International Monetary Fund (IMF) or World Bank loan. It is neither required nor desirable.

It is not required because there are several local alternatives for raising the necessary finances to deal with the immediate priorities of the State to fight the pandemic and get the economy out of its current crisis. An IMF or World Bank loan, even if contracted at what appears to be concessionary interest rates, poses great dangers to SA’s economic sovereignty and will permanently lock the country into the very conservative economic policies that have contributed to the current socio-economic problems in South Africa, including the unemployment crisis and growing poverty.

IMF / World Bank conditionality of austerity, monetarism, privatisation, trade liberalisation, financial liberalisation, regressive tax policies, etc. (measures all supported by Mboweni and National Treasury) have been proven by the pandemic to be detrimental to our society and economy. Governments all over the world had begun abandoning austerity even before the Covid-19 pandemic to stimulate their economies. In order to fight Covid-19, they are now implementing massive fiscal stimuli to improve their public health system and resuscitate their collapsing economies.

Governments are going against trade rules to rapidly produce the health equipment and medicines needed to fight the virus. The “free market” is being suppressed so that private hospitals are nationalised in Italy, Spain and other European countries, redirected by government to meet public health needs and private sector factories redirected to produce vital medical equipment.

Thus, we cannot accept the South African Treasury going to the IMF or World Bank for loans because they would be locking our economic policy into a so-called “neo-liberal” and conservative policy prison for generations to come.

This is precisely the economic policy that is currently undermining a strong enough response to the pandemic and working against the measures taken by other government departments to stop the spread of the virus and to save lives. An IMF or World Bank loan would be an easy excuse for National Treasury to continue with its austerity agenda.

Economic policies (including fiscal, industrial, monetary or international) will become immovable and our sovereignty further compromised. Our foreign debt will condemn future generations to a miserable life. South Africa would be unable to change its economic policy course at a time when most countries and a great many prominent mainstream economists have rejected austerity and now strongly support the use of expansionary fiscal and monetary policies to address economic challenges.

Further, if these loans are denominated in foreign currency, they are only likely to get increasingly expensive since the South African Rand is expected to continue declining against the U.S. dollar. Already the R/$ exchange rate has fallen from R14 in January to R19 in April – there is no reason to anticipate any bounce-back given the worsening world financial meltdown (and the flight to the alleged ‘quality’ US$ by financiers).

The caution against foreign borrowing must be general, including borrowing from the New Development Bank. We need the currency reserve to pay for medical equipment and for dealing with the emergency situation. Especially since South Africa’s foreign currency reserve has already been depleted by speculative outflows.

Therefore, we call on government to stop further negotiations with these institutions and to explore alternative means of financing the response to the pandemic, addressing the needs of our people in this crisis.

Much greater fiscal resources must be made available, in part through the loosening of monetary policy. The strategies that follow should include:

Finally, it is critical that all financing must be transparent and must not be accompanied by strings attached, conditionalities or proposed structural reforms 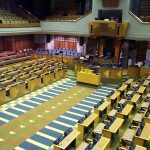 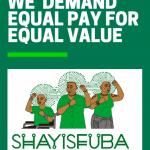 EXTEND URGENT FINANCIAL RELIEF FOR ALL IN PRECARIOUS WORKMember statements